I AM A RICH MAN 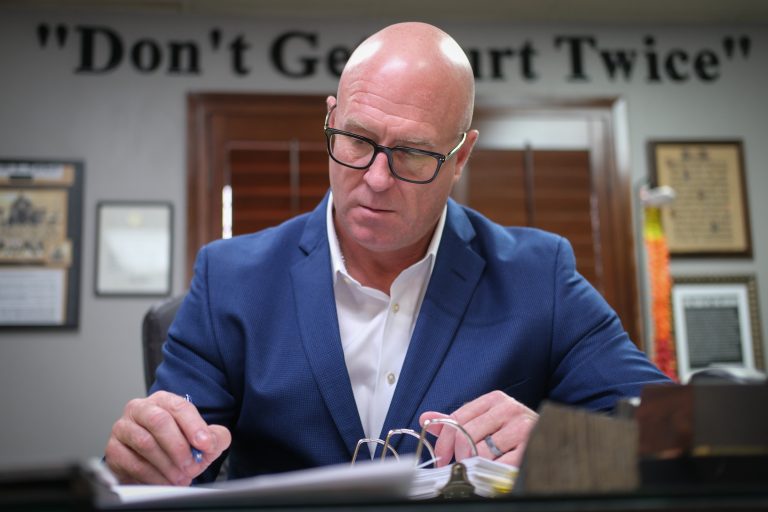 From The Desk Of J.Chad Parker

I am a rich man. People often think about the financial benefits of being a successful lawyer. I certainly have had my share of success and enjoy a comfortable life.

I owe it all to my parents for providing me with the avenue to become a lawyer. I also owe my success to the many other lawyers that I have come into contact with throughout my career. I have learned things from many lawyers both Plaintiff and Defense. As a lawyer, I don’t think we ever stop learning unless we decide to.

Lawyers are just like other people in any field. Some are smarter than others, some have more common sense, and some simply just work harder than others. One quality that I believe sets me apart is that I truly care about people.

Helping Those In Need Makes Me A Rich Man.

You have heard the phrase “talk is cheap” and “put your money where your mouth is”.
Those cliches reference a true sentiment which is that if you don’t put time, toil, or talent to use
for someone then your words are empty.

As a lawyer, I have opportunities to help people that others don’t have.
I have a reputation with insurance companies from representing individuals for many years.
In May of 2023, I will have been practicing law for 30 years. One of the most
rewarding things for me in being a Plaintiffs lawyer (representing individuals) is helping those
that need it the most.

Sometimes who is at fault is not always black and white. It is in those
circumstances where oftentimes I can provide the most help. I will give you an example of a
case I recently concluded for a person in real financial need. I did not take any fee allowing
her to end up with approximately $12,000.

That is a lot of money and certainly a lot of money for someone who doesn’t have much if anything.
My hope is that it allowed her to take a breath and relax from what appeared to me to be an extremely stressful life.

A woman came to me about an accident that occurred on Gentry Parkway in Tyler, Texas.
She did not have a car and generally walked where ever she went. She had a young special needs
child that she often took with her. She crossed the street every day at the same place to get
across Gentry to businesses where she could pay bills and or get something to eat.

This day was no different except for the light changing to green while she was halfway across the intersection.
Other cars stopped but one did not and ultimately hit her and her son. As you can imagine from
being hit by a car they were banged up and certainly scared. They were taken to the emergency
room where they were checked out and released.

The day following she was in substantial pain. She ultimately did physical therapy and then
I presented an injury claim (in the form of a demand letter) to the insurance company on her behalf.

How Insurance Companies Make Me A Rich Man.

The initial response that I received from the insurance company was that their insured (the
driver that hit her) had no fault in the accident. They explained that my client was not crossing at
a marked crosswalk.

While that was technically true the marked crosswalk was on the other side and
would have had nothing to do with whether this accident occurred. It was a technical pedestrian
violation that the insurance company was asserting to excuse their driver’s negligence
when all other drivers saw what was happening and did not hit my clients.

I filed a lawsuit because it is hard to go anywhere but up when the offer is zero. I took the case because I felt
sorry for my client and I figured if I could manage any outcome then I would ultimately give her
all of the money. I would obviously have to pay back the healthcare providers and expenses but
after that, I could choose to take no fee. This made me a rich man

Making A Difference Makes Me A Rich Man.

I am thankful that the “stars aligned” and that my client made a good witness for herself.
Lucky for me, the Defendant seemed uncaring, unengaged, and really unaware of what was going
on at the time of the accident.

My decision to take the case as well as some good fortune ultimately lead to a settlement.
This woman was extremely pleasant and appreciative of the
outcome.

Prior to the outcome, she was thankful that I had taken her case. When the case was
mediated the opposing lawyer commented that “Chad is probably the only lawyer that would
have taken this case.” I take great pride in that statement and believe it to be true. She is fresh in
my mind because she recently picked up her settlement funds.

She is yet another reminder about how much I enjoy people and helping them.
She reminds me, as do many of my clients from all walks of life, how similar individuals really are.
I am also thankful for the perspective I have from my clients which is a window into
the everyday hardships of ordinary people.

That perspective keeps me grounded and continues to motivate me to try and be successful on behalf
of as many people as will have me. I truly am a rich man.